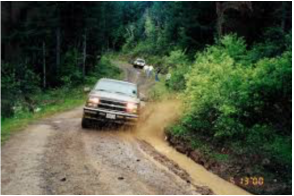 My beloved Chevy Suburban turned 200,000 miles old a while back. It was old and a bit beat up. Duct tape was holding numerous parts together. There were dents and scratches from banging up hundreds of narrow driveways lined with trees and rocks.

But it was a great truck. It pulled ambulances and fire engines out of ditches, rarely got stuck, and hauled all sorts of equipment and firefighters up to scenes in mud, snow and scorched earth.

The truck was testament to the fact that volunteers are jacks of all trades.

You Can Never Be Too ​Prepared…

In various pockets and compartments, there were maps, hazmat guides, algorithms for structure fires, handheld radios and even (for a short time) a guide to Weapons of Mass Destruction. I got rid of that when it freaked out my youngest daughter. Oh, and in the glove compartment was a tube of Vick’s vapor rub. I used to dab under my nose to blocks some smells.

A lot of miles. It wasn’t necessarily fun to drive, or “cool,” or inexpensive. It was certainly noisy. It could be cranky, like the time I lost the power steering pump and had to wrestle the steering wheel just to turn into our driveway. And changing a flat tire took herculean effort.

But mostly it was dependable. Whether it was a blizzard in the middle of the night, or a scorching hot day, we’d rattle and shake out of our driveway, hit the interstate with lights and sirens, and switch up to some narrow, ungraded road. Nothing really stopped that truck.

Man’s Other Best Friend: His Truck

I get that it’s weird to love a truck. But I did. And when we sold it, I moped around the house like a teenage boy after his first breakup.

One of my daughters, disgustingly insightful, mentioned that maybe it wasn’t selling the truck that had me down; it was realizing that I had about 200,000 miles on me, and I was cranky, a bit beat up and held together with duct tape.

Then they bought me a Ford Escape as a birthday present. A hybrid. Blue. I love them all more than life itself, but a blue Ford Escape?

It’s a new relationship. I don’t think it will haul generators uphill or carry fully bunkered firefighters to the fire ground. But my daughters say it’s enough for me now. It will get me to the fires and medical calls. Maybe I’ll just park farther away…