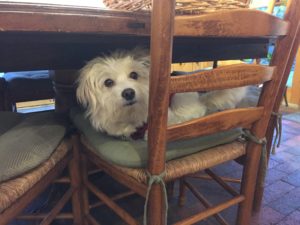 There comes the point where a home goes to the dogs. . . Literally. This just happened to us after we recently adopted our third dog — a rescue — named Maisie Rose Thunderbolt. Before Maisie came along, we had an orderly home with a routine. Importantly, the humans out-numbered the dogs. Now, it’s even-steven, and the balance of power has shifted.

This is all because of a small, white mix-breed puppy. Maisie came to us via a circuitous route that included a cage at a flea market, lost on the streets of Albuquerque, given up by her owner, taken in by our daughter and finally finding her permanent home with us and her new dog family, Nellie and Tank.

As I write this, she is lounging in a shaft of sunlight on our kitchen floor.

She, like all dogs, is an excellent lounger. But she has moments where she’ll go into hyperactivity, attacking toys, leaping from chair to couch and sprinting down our hallway. At barely ten pounds, she can jump over chairs, sleeping Bernese Mountain Dogs, and onto beds. Thus the name “Thunderbolt.”

Our other dogs, Nellie and Tank, are Swiss. They believe in and keep a rigid schedule of meals, outside time, walks and most importantly sleeping. Maisie is akin to being visited by your eccentric cousin who does everything the opposite way.

We are a bit in awe of Maisie’s energy, and we also have some concerns. Maisie startles easily. She can be overly submissive — rolling on to her back if you approach her — and she’s a flight risk. She is not yet attached to us or our home, so we worry she might bolt on a walk or sneak out of our house or yard. She is like the infamous Velociraptors in the first Jurassic Park, always testing the fences and gate. (“Clever girl!”)

I was worried enough that I decided to talk to an expert. I called Emily Burlingame, the Co-director of the Behavior and Training Department at the Santa Fe Humane Society and Animal Shelter.

Here is what I learned from Emily.

First, for dogs, socialization takes place in weeks 3-16. That is when puppies learn attachment (to other dogs or people). That is also when fear or anxiety can be learned. It doesn’t mean that a shy or fearful older dog can’t learn attachment, it just takes more time, skill and patience. We think Maisie is about a year old, and we suspect she had a chaotic puppyhood, so we know we have work to do.

Emily said dogs like Maisie need to know that they have choices — that they aren’t going to be forced into doing things, like meeting strangers, or other dogs. They need to go at their own pace. Forcing a dog to be pet by strangers, for example, can be akin to making a human with a fear of heights to take an elevator up the Space Needle: trauma-inducing.

Shy dogs need predictability; when they are fed, walked, pet and who takes care of them. At this Tank started nodding. I think he meant to say, “Told you so! Swiss dogs rule!”

In Emily’s words, the goal is to re-build a good history for the dog where they feel safe and in control of their choices. That is how trust is established — but it takes time.

Emily also had some practical advice for us. First was to have a good picture of Maisie. This was because if Maisie bolted or escaped, posters with pictures are much more effective than posters without pictures. Second, make sure that she was chipped and registered (she is). Next, she advised us to use at least a 6′ leash when walking her. This would allow more control and more time to react if Maisie bolted (and to make sure that her harness fit so that she couldn’t slip out of it.)

Finally, we talked about training. For a shy or unattached dog training is vital. This is not just because trained dogs are much easier to live with, but also because the ongoing process of training strengthens the relationship and builds the dog’s confidence.

It seems like a lot of attention and care is needed, but it pays such large dividends to know that you’ve rescued a dog. Emily finished our conversation with a quote that I’ll end with, “When you adopt a dog with behavioral needs, you get something back that you never knew you needed.”