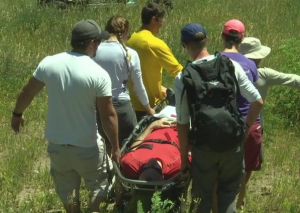 A young father fell over the handlebars of his bike and broke his neck.
Just like that.
Just like us, he was in his thirties, with a young family.
The fall happened a couple of miles off the road on a bike trail. Our volunteer firefighting team knew from our assessment that it was a dire injury. He had no feeling below his belly button. This type of call is a Trauma Stat, which means we need to go fast and alert the trauma team at the hospital. And yet it took us almost three hours to carry him out. It took ten of us, so careful, so alert, trying not to slip on the rocks. We would switch out positions every few minutes to keep fresh arms and legs carrying the litter. ​

Our patient stared stoically at the sky.

We shaded his eyes and gave him sips of water. We, the firefighters, kept looking at each other. We had the sinking feeling that nothing we or the trauma team could do would change the outcome.

At the trailhead, we transferred him to our Med Unit and began the slow drive over rutted roads to the hospital. Our paramedic drew a line on his belly that demarcated the parts of his body where he had sensation and where sensation stopped. She wrote the date and the time by the line.

Later that evening, two of us went to visit him in the intensive care unit. The neurologist, who was a friend, confirmed our fears: She told us that he had severed his spinal cord and was now a paraplegic. We went into his room. He was flat on the bed with a big halo head stabilizer holding his head steady. He was staring at the ceiling — there was not much else he could do. He moved his eyes as we came in. Seeing us, he whispered, “Just kill me.”  Dan and I looked at each other. We talked for a while and as we left Dan whispered, “This sucks.” ​
​

Three weeks later I was driving back to work after lunch. My pager toned out, “Hondo Traumatic injury. Man fell off bike. 15 Old Agua Fria Road. Time out, 12:45.”
My heart leapt to my throat. I was only a block or so away. I sped to the scene. As I slid into the driveway, another car came in right behind me.There was a man down on the driveway, bike next to him. He had a helmet on, but he was still. Before I could reach him, his 4-year-old daughter ran by me and jumped into his arms. Startled, he sat up. I watched —  in one of those moments when time itself slows down —  as his arms came up to hug her.

And he started to cry. The little girl cried. As did I.

Our Med Unit pulled in and we treated the dad as if he were the most fragile patient we’d ever had. I kept asking him to move his hands and feet. He would smile, comply and tell me he was fine. At the ED, they took an X-ray of his neck and declared him fracture free. He’d just had a concussion.
​

“Chance happeneth to them all”

It’s written in Ecclesiastes that “. . . chance happeneth to them all.”  But we don’t believe that, not deep in our bellies. We think there is order and reason in our lives. We think we are in control. At the same time we pray, we have Saint Christopher medals and totems to protect us, we trust our superstitions.

But we are only clever apes, standing on this spinning rocky ball in a universe that has rules we don’t understand, mysteries we cannot yet grasp. But chaos is everywhere. Chance is baked into the cosmos. (One father a paraplegic, another holding his daughter and weeping in relief.)

We can’t always grasp this because our sense of time and space is so fractional, so limited. We live in the interludes between chaos and think this is how the universe works.  And then something happens. Something “out of the blue.” (I have no feeling in my legs. A terrified child running to you.) And for an instant we glimpse the implacable face of the universe as it really is.
​
What can we do? Only this: ten of us carefully carry another over the rocks. A little girl, at the speed of light, leaps into father’s loving — and moving —  arms.  We carry each other.  We jump into the arms of those we love.