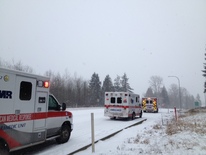 It was my fifth year on the Department. We had been paged to a rollover. In the middle of the scene, I jerked open the doors to the med unit. The young man inside was being treated for minor injuries from rolling his truck. He had been drinking and driving on a snowy road. He looked at me pleadingly. “Did you find my girlfriend, did you find Christina?” “You killed her,” I yelled back, “you son of a bitch, you killed her.”

The Sheriff pointed towards the door. “Get off my scene!” she said sternly.

I was furious and out of control. We had found his girlfriend in a field. She was in the snow, face down, arms and legs spread out as if she was making a snow angel. That was the name we gave her: the snow angel.
​

But as you can see, it’s often not easy. There are times when we are pushed to our limits. We’re exhausted, afraid, angry, judgmental.

For me, drunk drivers take me to my limits. They have caused most of the traumatic, nightmare-inducing calls that I’ve been on. I now seem to have a little switch in my brain that turns on when I smell alcohol at a crash. I am out of my body for a while, and I can feel that rush of righteous anger descend on me.

It’s an interesting word, “righteous.” In these angry moments I feel I am somehow morally superior, more decent, virtuous–“better than.” Because you are less than me, I don’t have to be kind; I can justify being unkind, even cruel.

“You son of a bitch, you killed her.”

Yet here is the thing. Not long after my outburst, I did some soul searching and I remembered this: When I was seventeen—a young man—on a winter’s night in Minnesota, I drove my girlfriend home on an icy interstate. We’d both had a couple of beers. The car slid. We did a 360 on the interstate, surrounded by traffic. We were terrified.

When the car straightened out, we broke out laughing.

I ask you as I asked myself: what is the difference between the young man at the beginning of the story, and the young man in Minnesota years ago?

In Antigone, Sophocles wrote, “Who is the victim, who is the slayer? Speak.” The truth is that we’ve all been both. Slayer and victim, guilty and innocent, righteous and dishonorable, compassionate and cold.

We are at core, at root, imperfect and fallible beings. When we understand we are both victim and slayer, when we understand that we have screwed up as much as anyone we walk past on the street, it’s much more difficult to be judgmental, to be righteous. And it is much easier to be kind.

It doesn’t mean that I’m not still be angry or frustrated at yet another DUI death. But now I remind myself that the only likely difference between that young driver and me is that I had better tires. That makes it much more difficult for me to feel self-righteous, and easier to be kind.

So what are we to do when that righteous anger boils up? Or when fatigue causes stress and you’re at your limit?

I’d add to that: when you’re furious at someone else’s recklessness and stupidity, remember that in all likelihood you’ve been there yourself, like me. It is easy and commonplace to blame, to be righteous and to be angry. It is difficult, rare and yet so needed to provide compassion and forgiveness. In the larger picture, we all share the experience of being human.

My challenge now is to be kind at every (inevitable) DUI crash.

Last word: I’m not a fan of Big Ideas. I have lived through multiple decades of “earth shattering” ideas only in the aftermath to discover it is still you and me simply trying to live our lives. However, I am an evangelist for the small moments of transformation. Every day presents us with those small moments to understand someone, to care and to be kind.