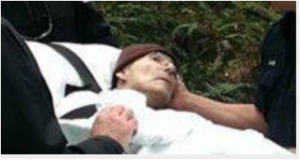 Emilio was sitting on the floor of his bedroom, propped up on his bed, surrounded by beer cans. He had on a filthy shirt. His skinny legs and feet were bare.

“Fuck you!” He rasped at us. “Goddamnit, why are you in my house! Just help me get up in bed, and get out. Get the fuck out!”

Emilio was in his early eighties. He lived in a house that was too big for one person. He only used the first room right off the front door. He had his bed, a stove, a chair and a small fridge. We never got further into the house. He was always lying on the floor in that room.

The first thing that you’d notice was the smell: feces, vomit, alcohol. Emilio’s list of agonies was long: Dementia, paraplegia, diabetes and being alone, the worst cut of all. He’d lost control of most of his bodily functions and had no one except the Fire Department to care for him. He was—understandably—furious with everyone: his relatives, his God and us, the Fire Department.

He’d call 911 because he’d fallen out of bed. Or his neighbors would call out of frustration after hearing him moaning and swearing at his dogs or at the sky. This happened day after day.

Arriving at Emilio’s house, we’d dab Vick’s Vapor Rub under our noses to block the smell. We’d walk in, ask him if he was in pain. He’d swear at us, mumble incoherently and gesture towards the bed. The bed was often in bad shape, littered with food, beer cans, urine and sometimes feces.

A firefighter would clean the bed and I will note here that it takes a lot of kindness to clean up human feces.

Then, a group of firefighters would gently cradle Emilio and lift him back into his bed while he moaned in pain. One of the EMTs would make sure he was covered with a blanket and had water. (And more than once, give him a beer from his fridge).

Then we’d leave, knowing that we’d be back the next day or the next.

The Kindness of a Firefighter

This is the world of volunteer firefighters. We learn that hostility and anger are often, as in Emilio’s case, suffering and fear in disguise. Firefighters learn that dealing with the Emilios, dealing with individuals who are suffering, is a much larger part of the vocation than running into burning houses.

Finally, after months of this, and with no relatives willing or able to help, we convinced Adult Protective Services to commit Emilio to hospice care. It was against his will, he swore and cried as we loaded him in the med unit.

We felt a bit of guilt mixed in with relief.

A few months later I read in a small obituary that he had died. There wasn’t much information, just a note about a service at a Catholic church.
​
But watching firefighters gently care for an abusive and angry Emilio taught me radical kindness. It’s the understanding that in almost every interaction in our lives, dealing with the rude, the mean, all those people who “trigger” our anger, we can make the choice to be kind. We can be kind even to the Emilios. Not only do we have this choice, but like firefighters, for every single time life calls upon us to be brave, life gives us one hundred opportunities to be kind. ​