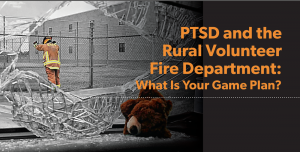 (A version of this article appeared in the NVFC Helpletter.)

If this hasn’t happened to you as a volunteer fire department officer, it probably will.
​
It goes something like this. First, there is a high-speed head-on collision with fatalities. All the dead are children in their teens. There is the dedicated and hard work of extrication of the injured, then the waiting for the Medical Investigators to show up before the deceased can be removed and placed in body bags. You are fiercely proud of your department.

But then, one of the younger guys stops what he is doing and says, “Hey, I think I know these kids . . . I gotta call my girlfriend.”

Another, who said he just couldn’t help with the bodies, is staring off into space.
​
A few months later, one of the department veterans says to you, “I keep having dreams. . . are we sure they were dead? They just looked like they were sleeping . . .”

My question to you, the volunteer officer, is what do you do? What is your game plan?

This article is about Post Traumatic Stress and the small volunteer fire department. The question is how — as volunteer officers —  we can help the individuals on our departments cope with the stress of traumatic calls and manage PTSD?
​

Approximately 20% of Firefighters have or have experienced PTSD. According to Mike Healy, the co-developer of the NVFC helpline, over 80% of the calls they receive are PTSD related.

READ MORE ABOUT THE NUMBERS!

A lot folks, both experts and firefighters, object to the word “Disorder.” In general, they prefer the name, Post-Traumatic-Stress. But I like the word. Here is the definition:
​”Disorder” is the disruption of the systematic functioning or neat arrangement of . . .
​
In the talks I give, I add that it’s the disruption of the neat arrangement of your life! It might be minor and short and long and acute, but certainly feels like disruption.

The Rural Volunteer and PTSD

After a particularly bad mutual-aid call, a friend of mine who is a career paramedic said that the conversation at their station that evening was, “how do volunteers cope with these calls?”

Her point was that a career crew went back to their station together and they talked about the call.  The city department had infrastructure for these situations, they had a wellness officer, insurance, health benefits, and the union.

But what does the average, rural volunteer department have?

And yet, volunteers are in many ways more at risk for PTSD. When you’re a career firefighter, you show up for your shift and you mentally “get in the game.” There is some psychological protection there. But for volunteers, especially the small departments who are “on” 24/7, you never know when the pager is going to tone out and what you’re going to find. We often go from “civilian” to dealing with mass casualties in the space of a few minutes.
​
Finally, the essence of being a volunteer is that we work in our community, we are there for our friends and neighbors. The cardiac arrest call at 1:00am could well be your neighbors. The DUI crash fatality might be the best friend of your son’s.
​

The most important action we can take is to educate our departments. Just as we are trained on infectious diseases we also need to be trained in PTSD, what it is, what the symptoms are and what help is available. PTSD training needs to be part of our annual curriculum. The National Volunteer Fire Council (NFVC) has virtual courses on both Behavioral Health and Suicide Prevention that can be used and adapted for any fire department.

2. Model
Our task as leaders is to “be the change we want to create.” With PTSD, we need to be open about it, talk about it and be clear that, like having the flu, there is no stigma attached; it can happen to anyone, including you.

3. Know your people
As leaders, we need to know our people. How do individuals normally respond in crisis?  What does it look like when it’s “not normal?” When Ellen, the steady, every-call Firefighter-EMT stops showing up, do you know why? When Bill, the ebullient guy always with a joke, clams up, is it because he’s just tired or is he playing the movie-in-his-mind about extricating the dead mom?

4. Sobriety and Sleep!
Believe it or not, one of the most simple and effective ways we can help is to make sure that firefighters involved in an incident are getting sleep and staying sober.

5. Know Your Resources
There are several ways to help depending on the individuals, the severity of the trauma they’ve experienced and the symptoms presenting.

On our department, we often start with just talking about it among ourselves or talking to firefighters individually. These sessions are mostly about officers listening, rather than sharing war-stories.

If anyone on the department believes it is warranted, our next step is a Voluntary Critical Incident Stress Debriefing. It is crucial that it’s voluntary. For some individuals, sitting around and reliving the scene with a group will just make the symptoms worse.

Next, the National Volunteer Fire Council has a 24/7 helpline for firefighters and families of firefighters. (1-888-731-FIRE (3473).  They can point you towards a variety of resources to help.
Finally, there are a variety of emerging therapies and clinicians who deal specifically with PTSD. It’s a good idea to have a couple of phone numbers of specialists who can help in a crisis, especially concerning substance abuse and suicide prevention.

A wise ex-chief once lectured our department, “If you want to be 100% safe, turn off your pager.”  Being a firefighter, even in a small town, carries inherent risks, which we all accept as part of the vocation. On the other hand, as officers, our number one responsibility is to keep our people safe. We focus on physical safety every day; keeping a watchful eye whether our team is on the highway at midnight or at a wildfire in the midday sun. But we also have a moral imperative to keep our firefighters safe from the effects of emotional trauma.

We have a moral imperative to keep our firefighters safe from the effects of emotional trauma.

​The last thing we want is hear about is one of our own who has quit or retired and is psychologically damaged, maybe using drugs or alcohol or thinking of suicide. I never want to have to ask myself, “Was there anything I could have done?” 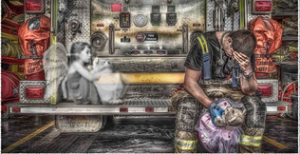 It is not a simple thing to be a volunteer fire department officer. But we must never let anything get in the way of our first duty, to keep our folks healthy, physically and mentally, and to make sure they get safely home after every call.
Know the science about PTSD.  Have a game plan. Take care of yourself and your department. Be Brave! Be kind! Be safe!Photo courtesy of Lauralee Veitch.  Amazing Art courtesy of Daniel Sundahl.  (Dansun.com)