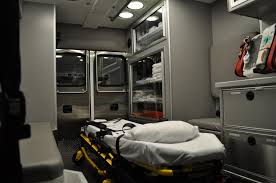 Our young daughters were often forced to get up on Saturday mornings to sit at the station and watch us clean trucks and train. One Saturday, when our youngest, Sully, was five years old, I was working on the ambulance. I had her sitting in the back while I pulled the ambulance out of the station. Before I started the engine, I turned to her and said, “you might hear voices when it starts up, don’t worry about it.”  I was referring to the annoying built-in voice prompts that come with ambulances these days: “Backing up!” & “Braking!” & “Parking brake off!”

Three or four years later, Sully told me that this terrified her because she thought I was talking about the voices of the ghosts of patients who had died in the ambulance.

​Thus goes the lives of children of firefighters.