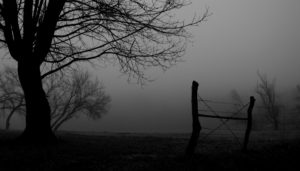 It was about 7:00 p.m., a spring evening. I drove up our driveway and got out of the car. I opened the front door, the dogs dashed out and there was my wife Laurie and then four-year-old daughter Brynne. Laurie was sitting on the floor, knees up, head resting on them, propped up against the wall. Brynne was playing with a doll next to her. As an EMT, I would have normally been instantly alert. As a weary dad I just asked, “What’s up?”

Laurie answered that her stomach really hurt, and she was so tired she couldn’t get up. Enormous flashing red signs: Woman. Abdominal pain. Too tired to move.

I asked, “Do you want me to call your doctor?”

Laurie comes from a long line of Scandinavian stoics. Like Monty Python’s Black Knight, she could lose a leg and her comment would be, “I don’t need your help, I can hop.”

But then she added, “Could you help me get into bed and then can you feed Brynne? Let me rest and I’ll be okay later.”

Neon signs painted on the walls: “This woman is seriously sick.”

I helped her slowly walk down the hallway and into bed. Then I scooped up our daughter, went back to the kitchen, made Mac and Cheese and turned on the TV. A few minutes passed. I heard Laurie weakly calling my name. I rolled my eyes at Brynne and went back to check. I said, “Look, either let me take you in now or I will call 911.”

It surprised me when she said, “Better go in.”

I paused. I thought.

That got my attention. I got on the phone and called Tahmina, our Medical Captain.

“Tahmina, I think Laurie needs to go in to the hospital. I don’t want to call 911, but could you come up in the Med Unit and we can take her in?”

Tahmina asked what was going on, and I minimized, “She’s too weak to get out of bed, her stomach hurts, she probably just has the flu. She’s okay when she’s lying down but standing up she gets pretty sick.”
There was urgency in Tahmina’s voice: “I’ll be right there.”

I was not connecting the dots. Our neighbor jogged over to watch Brynne. The Med Unit pulled into our driveway. Tahmina came in and we slowly walked Laurie, now dizzy and holding her stomach, out to the Med Unit.

“Tahmina, I’m so sorry we called you, we could have just driven.” Laurie said.

We got her in the ambulance and Paul, our Assistant Chief, drove us away.

Laurie sat up on the gurney and tried her best to be a good sport, but she was pale and in pain.

Tahmina looked at Laurie, “I’ll get a set of vitals.”

As Tahmina wrapped the BP cuff around Laurie’s arm, she asked, “Have you been sick?”

“Maybe food poisoning? When was your last meal?”

Laurie— also a Firefighter-EMT — looked at me. We both knew the algorithm that Tahmina was following. Laurie replied, “I had breakfast about 8:00. I worked until 2:00, and then I started getting sick. I came home. I couldn’t stand up.”

“Laurie,” Tahmina asked, “Could you be pregnant?”

Tahmina looked at me and then turned to Paul, and said, “Let’s go lights and sirens.”

Paul hit the lights and accelerated.

Laurie closed her eyes and nodded.

I grabbed the IV kit from the shelf. I noticed my hands were shaking.

I put a tourniquet on her forearm and tied it. Tahmina handed me an alcohol swab. I cleaned Laurie’s wrist, searching for the telltale blue line of a good vein. I saw nothing, her veins had disappeared. I checked her other arm, nothing.

We got her out of the Med Unit and wheeled her into the Emergency Department on the gurney.Tahmina talked to the charge nurse. I was holding Laurie’s hand. The nurse took one look and was on the phone. Another RN took her blood pressure. It was now 90/60. Laurie’s OB-GYN just happened to be attending that night. He walked over, took one look at her, palpated her belly and said, “Prep her for surgery. Stat.”

He turned and walked to the surgical suites to scrub in.

The nurses hovered over Laurie like angels.They too had difficulty finding veins for an IV because Laurie’s blood pressure was crashing. But they finally got one and then wheeled her up to surgery. In the hallway the anesthesiologist gave her morphine through the IV line for pain.

Laurie perked up immediately and said, “Wow, now I know why people get addicted to this!”

Five minutes later, the surgical nurses came and rolled her into surgery. The doors swung shut behind them.

This was when the tables turned.

Now, I was the “husband,” powerless and just trying to keep it together. The nurses were being kind to me while I filled out forms; insurance, promising-not-to-sue-if-we-screw-up forms, and the big kicker: “Do you want a Priest, a Rabbi or a Minister if . . .”

Seeing the look on my face, the nurse just smiled that sad nurse smile.

Laurie was the center of my universe and there was nothing I could do to help her. I could feel my heart dropping out of my chest. I had no magic. It was in the hands of timing and a surgeon.

Sitting there, I thought of all the times as smalltown EMTs we sat with relatives of patients as they waited. During the waiting times, the pain and fear emanates in waves. There is little you can do except listen and get coffee. You can’t say it will all be fine, because in this particular room, sometimes you just don’t know.

Tahmina sat with me. My sister, also a firefighter-EMT, showed up and sat.

An hour later our OB-GYN came out and said Laurie was going to make it, but it had been a close thing.
“A close thing?” I thought, as the reality crashed down on me.

Reading my mind, the Doc clarified, “Another hour and she would have bled out. . .”

Had Laurie not said, “I need to go in,” had Tahmina not understood that it was an emergency, Laurie would’ve died.

When a loved one is wheeled off to emergency surgery, the illusion that we are somehow protected disappears like fog as the sun rises and we see reality.

The reality is that we are all vulnerable. But of course I knew that, years of being a firefighter had driven that lesson home.

But I didn’t believe that we were vulnerable.

I was pretty sure that we were protected. I believed that because we’d seen so much stuff, that stuff couldn’t happen to us. I thought, “I’m a firefighter, therefore my home will never burn down. I’m an EMT, therefore I’m too smart to be in crash with a drunk driver, and my wife will never have an ectopic pregnancy.”

But none of that is true. No one has special protection. Wealth, intelligence, your zip code — being a firefighter — doesn’t protect you.

Laurie spent the next few days in the hospital recovering from the surgery. When I finally brought her home, we were both quiet. She was tired, and I was guilty and furious with myself for missing the obvious signs of a burst ectopic pregnancy.

A few weeks went by and our lives, as lives do, returned to normal. We had a daughter, we had work and families. Life just flows forward, seemingly not impressed with the past.

The sharpness of that day faded but a thread had been pulled. It was one more testament to the fact that everything can turn on the proverbial dime. I became the husband/dad/brother who wanted to know where everyone was and that they were safe (Laurie called me neurotic). This lasted for a few years until it too faded. Then the fog settled in again: nothing can happen to us! We are protected!

Maybe we are after all, in the playwright Eugene O’Neill’s words, “fog people”. Reality is blinding, it will wear you down. The soft comfort of the fog calls us.

But we have to resist. Crisis and trauma, as terrifying and heart-wrenching as they can be, are also the shafts of light that cause us to see. They illuminate, they scour the fog from the shadows, and we are left with simple truths in plain sight: That our lives are fragile. That we are never promised tomorrow. That we must hold on to those we love.