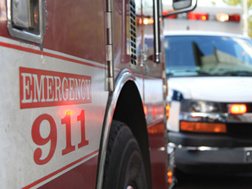 To the acquaintance in the line at the grocery store:

You shook your head and asked me, “Did you hear about those poor kids in the crash?”

​
​
I was holding the head of the girl in the backseat. The driver was dead in the front seat.

A woman with a Santa Fe Fire Department jacket stuck her head in the window.

“Are you a paramedic?” I asked.

My gloves were bloody, and there was a long cut on this teenager’s head. The list of things I needed at this point would’ve taken hours to go through. But I knew I didn’t have time for that.

“Got it,” she said calmly. Like ordering lunch. Like it was her tenth crash that night. “I’ll be right back.”

The girl in my arms moaned, “what happened?”

Then I heard the extrication crew. The hydraulics starting up.

“We’re going to cover you up, Hersch! Here’s a blanket!”

Someone threw a blanket over the girl and me to protect us from breaking glass. The blanket muffled all the sounds.

“What happened?” she cried again. “Is anybody else hurt? Fuck, my head…”

I heard the glass on the window shatter. There was the crunching of metal as the crew began prying the door off.

“I got ya,” I told the girl. “The door’s all smashed in, so we need to take it off. A few minutes and we will have you out of here.”

I heard the woman paramedic I had spoken to earlier: “Your patient is number two. We’ve got number one and we’re going lights and sirens to St. V’s.”

The blanket came off.  The backdoor was gone. A board slid in.

I grabbed her legs and we slowly pivoted her around and got her on the board. She grabbed my arm.

Then someone grabbed the board; I was still holding her head. A minute later we were at the Med unit, brightly lit up inside with its big rear doors open. I let go of her as two EMTs slid her into the back. The door closed and they were gone.

I squatted down and watched the rig take off, lights flashing and siren echoing off the hills.