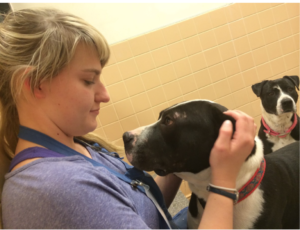 A box of puppies on the side of the road. An elderly woman stops, picks them up and brings them to the Santa Fe Animal Shelter. They are approximately six weeks old. They are taken home by a Shelter “Foster.” Two weeks later, with all their shots, they are returned to the shelter and staff is amazed to see these puppies are the most social puppies they’ve ever seen.

This is the third column about raising bomb-proof dogs. In the previous columns I’ve written about advice great trainers have, but I have one final question. That is, how does the Santa Fe Animal Shelter help nurture bomb-proof puppies?

The answer is foster care: the angels are called “Fosters.” The program is called The New Hope FosterProgram.

First, a little science. For dogs the first eight weeks of life are crucial for their emotional development. Canines — like humans — are social animals. Think about wolves and coyotes in the wild. During that period, the pups are in constant contact with their siblings, their mom and the pack. They are always touching and in close contact. The wiring for socialization, for how to act with others is laid down during those first eight weeks. Take a puppy out of that environment and raise them alone and they cannot socially develop.

At the shelter puppies and pregnant dogs are constantly arriving. The staff often has no idea how these dogs have been treated. They know that a puppy or a dog that is not socialized — doesn’t go up to people, is scared or aggressive with other dogs or cowers in the corner — has a low probability of adopted. To solve this problem, the New Hope Foster care was developed.

Currently, according to Chelsea Gregg, the New Hope Coordinator, there are over one hundred foster families — how cool is that! — in Santa Fe on call to take the moms, litters or that occasional solo puppy. Their task is to create a safe, clean and loving environment that “feels” to a puppy like home.

I spoke to Raya Albin, one of the veteran “Fosters.” As a sidebar, Raya has worked as a volunteer with Shelters in New Orleans and Phoenix. She is enthusiastic about Santa Fe Animal shelter, calling it amazingly organized and helpful. Stop here for a second: Quivers go up my spine when I hear about something be amazingly organized in Santa Fe.

Raya told me her job is to mimic the litter’s mom; feed them every few hours, play with them, clean them and cuddle. I did a quick poll of our household and no one could think of a better job description. When Raya has just one puppy, she often carry’s him or her around in a sling while she works at home. Warm puppy, snuggled and sleeping against your chest. That would eliminate 95% of my stress. She noted that most puppies given a choice between food and being held, will choose being held. I told our food-obsessed Bernese Mountain Dog Tank this tidbit and he snorted in disgust.

The Fosters are responsible for bringing the puppies in every two weeks for shots and to be weighed. Before they can be brought back to the Shelter for adoption, they must be socialized, two months old and weigh at least two pounds.

In the background of this entire process is more science and care for the immune systems of puppies. Because their immune systems aren’t fully developed, it’s important that they are not exposed to canines diseases usually transmitted by unvaccinated dogs. Since many of the Fosters have pets, the New Hope program makes sure that all the dogs in the home are vaccinated. The best of all puppy worlds is when there are other dogs, a cat or two and kids. But protecting the health of the puppies comes first.

When they come back to the shelter for adoption the care continues. Puppies are kept by themselves with their littermates or puppies the same age. There is another cadre of staff and volunteers who continue the socialization work. In the name of good journalism, my daughter Sully and I volunteered to do the difficult and challenging work of keeping the socialization going. This meant a grueling hour of swaddling and holding puppies. They are squirmy and constantly trying to lick your face. Then, if that wasn’t enough, they’d fall asleep in your arms! We stoically soldiered through it.

But in the end, these little ones are socialized, near bomb-proof and ready for the big world of yards, adventures and love.