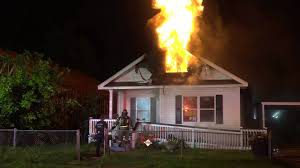 Driving down the road I heard the first on scene firefighter on the radio, “Smoke showing.” She said, “Garage is fully involved. Let’s plan a five minute evolution!” The five minute evolution is our language for getting water on a fire and flowing without interruptions within five minutes of arriving on scene.

I drove around a corner and there, I could see dark smoke rising from a neighborhood about a mile away…

For me, even after twenty-five years of firefighting, there is still something shocking about a column of black smoke ascending in a quiet residential neighborhood. Everything is normal and tranquil, a Sunday afternoon. Yet in the middle of all this calm a home has erupted–as if a missile came out of the sky and targeted this one individual house.

It’s just another small crack in our collective illusion that life is predictable and we’re somehow protected.

As firefighters, we have a mission now. From all over the county we’re converging on this column of smoke. We’re not holding existential thoughts. Our adrenaline is rising, we are thinking about the arcane and intricate details of fighting a fire, details we’ve memorized and dreamt about.

I turned the corner and saw that the column of smoke had turned white. This was important, it was the doctor telling a patient that they’ve controlled the bleeding. White smoke meant that water was being put on the fire. An engine had arrived, the five minute evolution was in progress.

A group of us arrived together. We lumbered into our bunker gear, grabbed tools, threw SCBA tanks on our backs and began the well-practiced ritual of knocking down a fire.

You would think that there would be a sense of urgency, all those adrenalized firefighters and an active fire. But there’s not. The owner, an elderly woman is out and safe. Half of her house is destroyed, the kitchen blackened, the stove melted. The garage ceiling had collapsed on to her burning car. The first arriving teams had extinguished the active fire in the kitchen and the garage. Now we were just calmly focused on making sure the fire wasn’t spreading in the ceiling. Grunt work, slow and steady.

We’re joking with each other now. Keeping our energy up, we laugh at our ages, at how ridiculous it is for a group of fifty and sixty year-olds to be doing this kind of work. Wendy, the Assistant Chief and Incident Commander, just shakes her head at us.

But in the driveway, standing looking at her house is the owner. She’s distraught. Her home is gone. She has no place to go. Seeing her, we’re quiet again, respectful, wanting to take care of her. Wendy walks down, put her hand on the woman’s shoulder and talks to her in her calm and kind way.

This is the way of fire departments. No one died or was hurt. Houses, cars, belongings are just things: replaceable. In the end, this fire is not a tragedy as much as it a misfortune.

To this upset woman I want to somehow pass the knowledge of the hundreds of fires we’ve seen, the smoke columns rising from neighborhoods and whisper to her, it will be okay’ it will be difficult for a while, but it will be okay. But now isn’t the time.