“The greatest problem we have as humans is that gray area between what we can control and what we can’t. For instance, this morning I can try my best to write a good article. I can research, read, prepare, rewrite, start over, rewrite again, etc. I’m doing my best.

But some days I simply won’t write well. And sometimes I’ll write something that people hate. Either because it doesn’t suit their style or they disagree with me or they dislike me for some other reason.

I choose “writing” for this example because it’s something I deeply care about. I love to write for others. I love it when people like my writing. It makes me feel better.

Which is the gray area. Because even though part of my reaction to my own writing is based on the responses of others, I have “almost” no control over it. I can do what I can do: hard work, preparation, etc. But still, where my control ends, the entire rest of the world begins.

I have to remind myself constantly, I am just a drop of water in the ocean. And ultimately that drop of water dissolves and is absorbed by this giant ocean of life around us. And that’s it. That’s the summation of my life.

It doesn’t mean I shouldn’t enjoy being this drop. What a pleasure it is to participate in life. But I’m just participating it. I’m not the ocean. And I have no influence over the waves that spin me around, or the sun that heats me, or the land all around that I could spill into.”

— That’s James Altucher telling us about the philosophy he lives by, something he’s dubbed, “Stoic soup.”

​In the year 64 AD, during the reign of Nero, a fire tore through the city of Rome. The French city of Lyons sent a large sum of money to aid the victims. The next year the citizens of Lyons were suddenly struck by a tragic fire of their own, prompting Nero to send an equal sum to its victims. It’s not unlike what happened here in America: In 2005 New Orleans was ravaged by Hurricane Katrina and the city of Houston took in thousand of refugees, and provided incredible amounts of aid. Then last week, as Houston was ravaged by Hurricane Harvey, the people of New Orleans put together a pay it forward campaign to help the people who had helped them a decade before. The so-called Cajun Navy is in Houston right now rescuing people trapped by the floods. The story takes another twist too—as the storm moved from Houston to Louisiana and now many in New Orleans are evacuating and preparing for damage once again.

Seneca would would write a letter to a friend about those fires to point out the alarming irony of one city helping another, only to be struck by similar disaster not long after. The Stoics would take all this as an opportunity to practice our philosophy. When something bad happens to someone else we should be prepared to help—if we are in a position to. We should also use that situation to remind ourselves: There but for the grace of God, go I. There but for the grace of God, go the people I love. We should consider how easily—indeed how likely it is—that one day we may find ourselves in on the wrong end of such an event.
“Being unexpected adds to the weight of a disaster,” Seneca wrote, “and being a surprise has never failed to increase a person’s pain. For that reason, nothing should ever be unexpected by us.” Remember how easily your life could be disrupted by a terrible tragedy, how quickly you could lose everything. Remember how often history follows the pattern of Rome and Lyons, Houston and New Orleans. In a position to help one day, desperately needing it the next. Prepare for this—mentally and practically. It will make it better. It will also make you kinder.
When you can (if you can), do what you’re able to do to help those in need. Because soon enough you may be asking for the same thing.

From the Daily Stoic:  (https://dailystoic.com)

​​Saturday was Women’s Equality Day and it happened to fall just as the controversy about a memo from an employee of Google about female programmers is finally dying down. If the ancient Stoics were here they would have shaken their heads at that entire fiasco. First, they wouldn’t let the scribblings of anyone, let alone some random employee at a tech company, get them so upset. And second, they would have said to that random employee, “What the hell are you so worked up about, man?”

They would have disliked the memo because it tried to argue about averages, as if they mattered in any practical way. The Stoics had no time for that nonsense—they cared about the individual. They would have agreed with Theodore Roosevelt’s point when he was asked about the then controversial movement for women’s suffrage. He said he didn’t understand the big deal, because whatever differences there might have been between genders, it paled between the differences he saw between “men and other men.” Point being: It doesn’t matter what group anyone is a part of—it only matters what they do with their individual capacities and potentials.

The Stoics were shockingly early to the notion of equality of the sexes. As Musonius Rufus put it, “not men alone, but women too, have a natural inclination toward virtue and the capacity for acquiring it, and it is the nature of women no less than men to be pleased by good and just acts and to reject the opposite of these.” More important, they believed that everyone and anyone was capable of excellence, regardless of station, origin, or gender. Epictetus was a slave, Marcus was emperor, Cato’s daughter was a woman and so was Seneca’s mother Helvia, who he wrote often about Stoicism—all were expected to rise to their particular occasions and we admire them because they did.

The next time you find yourself drawn into some idiotic debate about racial differences, about gender, about immigration, about identity, resist the mistake of applying labels and make judgements from them. There are brilliant men out there and utterly incompetent ones. There are brilliant women and utterly incompetent ones. (And this is true for every other kind of category.) We are all equal in that way. The only inequality that matters—that we should judge people on—is what they do as an individual. 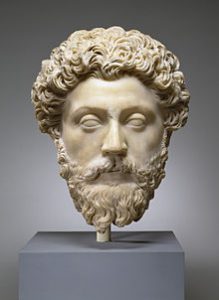 How much of your time is spent thinking about what that rude person said to you? Or whether so-and-so will like you. Or if your coworker will follow through on their part of the assignment? And not just time. How much anguish, angst, and anxiety has it caused you? How much sleep have you lost because of these things outside of your control?
Marcus Aurelius—someone who, as Emperor, had his share of critics and frustrating subordinates—said, “Tranquility…comes when you stop caring what they say. Or think, or do. Only what you do.”
How they feel isn’t in your control. What they do (or don’t do) isn’t in your control. What they think of you isn’t. You know what is? What you do. The actions you take. The actions you take in response to the actions they take (or don’t take). Focus on the part that’s in your control, stress only about what you do, and you’ll find the tranquility Aurelius was talking about.