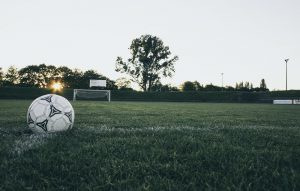 I was standing next to another soccer coach watching our high school team do sprints on a windy and cold October afternoon. This often happens when we’ve run out of stuff to do: Make them run!

While they were off, the other coach leaned towards me and said, “I think part of our job is to teach kids pain: what is real pain and what is just being uncomfortable? I don’t think a lot of them know the difference.”

This is obvious in young athletes who are just beginning to explore the boundaries of their abilities: what does it feel like to reach your maximum heart rate? How does being really sore differ from being injured?Over time, athletes increase their ability to deal with pain and stress. They know they “can’t catch my breath” moment after an anaerobic session will pass, and that soreness will fade and injuries will heal.

Almost without knowing it, athletes learn to be physically and emotionally tougher. They are then able to perform at a higher level and thrive through challenges that would daunt most non-athletes.

Being tough is a requirement for being a competitive athlete. A 16-year-old soccer player reminded me of this a few years ago. Halfway through a game, he came off the field after being kicked in the nose. His nose was split open and his face was covered in blood. He had a laceration from the bridge of his nose to the tip. I thought, “well, he’s done for a couple weeks.” Our trainer took him aside and used butterfly bandages to close the laceration.

Five minutes later, he was standing by me. Swollen nose, still a little bloody, covered with bandages. “I’m ready to go!”

So I did. He went back in, played the rest of the game, scored two goals.
​

Life isn’t so different from soccer

I’ve thought about that moment and its message a lot. On one hand, we naturally want to protect kids. On the other hand, one of the most important lessons that comes from the playing field is that you have to be tough; you need the ability to endure pain, suffer setbacks and not fall apart when things don’t go your way.

Why is this important? Because life, even our first-world comfortable life, requires the same thing: We need to be tough.

It only takes year or so on the Fire Department to see this is true. Dealing with the sudden cardiac arrest of your husband, a cancer diagnosis of a loved one or watching your house burn to the ground. These can be shattering moments.

But here is the irony. In these moments, we don’t have a lot of choice other than to be tough. We can fall on the ground, wail to gods or the universe, complain and point fingers. But none of that will help. Ultimately we have to get up and deal with the problem. We need to be tough.

This will seem contrarian to some, because it’s not about winning. In fact, it starts with a heart-breaking loss.

​The High School boy’s soccer team I coach scored a goal in the second half against a terrific team and one of our rivals. We held that lead down to the very last few minutes. Then, as happens in soccer, the other team scored two goals in less than four minutes.

It was a crushing loss. At the whistle, the other team sprinted onto the field, whooping it up. Our guys dropped to their knees with that pain in the chest: How could that have happened?

​Of course, that’s just like life. Stuff happens, losses are snatched from the jaws of victory. Life is rampant with disappointments, failures and the unexpected. Most of this is out of our control.

Of course, that’s just like life. Stuff happens, losses are snatched from the jaws of victory. Life is rampant with disappointments, failures and the unexpected. Most of this is out of our control.

​What we can control is how we respond to difficulty and that is what a couple of teenage senior captains reminded me that afternoon.

Here is what happened. Our captains — the guys with most on the line for this was their last season — called everyone together.

“Bring it in,” they yelled and the team gathered in a circle, arms around each other, captains in the middle. It was a circle of exhausted and discouraged soccer players.

The coaches stood outside the circle and just listened.

“I’m so proud of you,” Adam, one of the captains spoke. “That was the best soccer we’ve played all season. It sucks to lose, but they are the third ranked team in the state and we nearly beat them. That was a great game!”

Our final captain, Drake, jumped into the middle of the circle, “We’ll get them again boys! I’m so excited for our next training! I want to work so hard!”

There was no blaming, no whining, no “ain’t it awful.”

​There was no blaming, no whining, no “ain’t it awful.”

​Rather the captains focused on framing the loss, tapping down the drama, and being positive and optimistic. They pointed our team towards what they could control: solving problems and working hard.

During the circle, my coaching partner and I both smiled at each other. We knew that these are the moments in sports that are better than winning. You see these kids — that we’ve known since they were twelve —  grapple with important things: dealing with disappointment, motivating a team and focusing all of us (coaches included) on what we can control; our work ethic and our attitude in the face of loss.

My dad taught me that sports isn’t so much about winning and losing as it is about teaching players about the potential of their lives, who they can become if they believe in themselves and work hard. When I began coaching, he reminded me that sports was about grace when you win and resilience when you lose.

This day those lessons was passed on to a new group of young players by their captains. They learned they are part of this magical experience, a real team. They learned, I hope, that even when there is a crushing loss we can get up the next morning and go to work.

My assumption is that some of us are discouraged, disheartened, “done” because this wasn’t a winning season.

I know it’s hard to lose a lot of games, especially after you’ve had so many winning seasons.

But that’s sports. Especially with youth sports, players quit and find other teams or other activities. Players get hurt. Other teams get better. It’s the way of sports: stuff happens. We’re not

the first team to go without a win in a season, and trust me, we won’t be the last.

But that’s not important.

Here’s why: in life, stuff happens too. There will always been disappointment, discouragement and failure. We will all have “winning seasons” and plenty of “losing seasons.”

Most often, we are not in control of the stuff that causes winning or losing (ask your parents). Look at us. Players leave a team, players get hurt, a dufus coach (that would be me) screws up at game time.

Answer: You can either quit or work harder. When you work harder you are still not guaranteed success. But if you quit, you are guaranteed failure.

I grew up with a dad who would rarely let me quit. Until the day he died, he worked. Even when doctors told to him to rest, it wasn’t in his nature.

A story: We lived in rural Minnesota where we had a pasture and boarded horses. We would also flood part of the field to make a hockey rink every winter. One February, when it was way below zero, the water line (that was six feet underground) froze and then burst. We had to fix it or the horses would be without water.

My dad and I talked and I volunteered to dig up the line. (It sorta sounded like fun; a teenage boy thing). Well, it was so much harder than I had imagined. I had to build a fire on the ground to melt the one foot of snow and frost before I could dig. I thought it would take an hour at most to finish. Four hours later, as it started to get dark, I’d only dug a few feet. I went back to the house and told my dad it was too hard. (I had already learned that we were not to use the word “impossible.”) He told me to get some hot chocolate, warm up, go back and he would join me to help.

It was a school night, but we dug together until we found the pipe and fixed it at 2:00 a.m. His lesson was simple: when you commit to something, you finish. Sometimes the only way out is to work, to dig, shovelful by shovelful. I’ve never forgotten that.

So, soccer. You’ve had a losing season. Guess what? This is the universe asking you what are you made of? Can you handle adversity? Are you going to stop digging? Or are you going to work?

I play and coach soccer because I love the game. I work at it because I love it. Not just winning; I love the game. I love every part of the game: the touch of the ball, passing, running, grass, talking about technique, tactics and shape and coaching. Coaching is such a blessing! Then there all the other fanatics — from dozens and dozens of countries — that I’ve become friends with over the decades. Winning is fun, but the game is the most beautiful, unimportant thing in the world.

Finally, if you’re lucky and you’re paying attention, you will find something to do in your life that you love. Then you will learn if you love something— truly love it — you still have to work. You will learn that you cannot give up, even after a losing season or two, or three. Most days you will wake up and know you still have to dig. If I could wish you anything, it’s that you enjoy the digging.