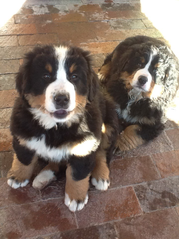 Bomb-proof: Not easily frightened, able to calmly deal with new situations and stimuli, won’t go through screen doors when the UPS guy arrives.

In the first part of this series I wrote about picking a puppy that was a match for your lifestyle and how important the breeder was.

This column is about when you bring the puppy home—now what?

My obsession is training our dogs to be bomb-proof—dogs who sit, observe and calmly watch the world go by.

We have a long, long way to go. I learned too late the skills needed to train a calm dog, and thus have spent the last years chasing our Berners down roads, over fields and profusely apologizing as they jump through the car windows of strangers.

Our dogs are past the best canine learning age—that first year of puppyhood—so I consider them remedial learners. But against all odds, we are making progress.

I’ve been taking the sage advice of Joey Padilla of Santa Fe Tails and Jill Felice of Assistance Dogs of the West.

The two big ideas I’ve taken from them are lots of exposure and “let the treats fall from heaven.”

Here is a simple principle: the more of the world that puppies are exposed to early, the calmer they will be later. The critical brain developmental time for a dog is those first few months. For comparison, human brains seem to continue to develop until the early twenties, when a child finally gets that, just because there are checks in the checkbook doesn’t mean that there is money in the checking account. (“Wait, what?” is their normal reaction.)

Back to puppies. From the day you bring a puppy home, it’s a hands-on job of exposing them to you and a new environment. They need to be regularly and gently handled in all circumstances. As a kid, I freaked out when our ten-week-old German Shepherd growled when I started to pet her while she ate. My mom made me sit with her and continue petting her until she realized I wasn’t going to take her food. I was a little sensitive about this because that same year I had reached for my friend’s French fries and was stabbed in the hand with a fork.

There is a debate within the veterinarian community about when a puppy’s immune system is strong enough for exposure to the bigger world. But as soon as possible it’s crucial to expose them to all the things that cause consternation. Kids: puppies are suspicious of little humans. Other dogs: dogs are hierarchical and social pack animals. You want to keep your puppy safe, but it’s crucial that they learn how to interact with other dogs. And it’s best that this interaction is off-leash so they can follow the time-honored rituals of canine meet and greet. Also, guys with beards and hats: apparently dogs haven’t accepted the whole hipster thing.

The solution is… exposure! As Joey Padilla pointed out, some of the calmest dogs you’ll ever see are the partners of the homeless. They are exposed to everything all the time. Lots of exposure reduces that innate fear of the unknown.

The “how to” takes time but it pays off. Take your puppy to a park, a mall or, if in Santa Fe, to the Plaza at least twice a week. Take them to places where they will be exposed to all sorts of stimuli. Here is the key: take along lots of treats.

When your puppy encounters something or someone that causes barking, whimpering or lunges, let the treats, in Joey’s words, “Rain from heaven.”

After a few trips your puppy will associate the guy with the beard and hat with treats and probably search them out in the crowds. 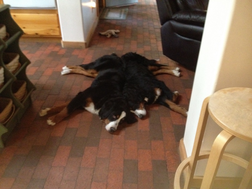 Testimonial: I began using this strategy with our Nellie and Tank. They’d always bark and lunge at a neighbor on our morning walks. After a few walks when treats “rained from heaven,” they now see him and turn to me ready for the celestial downpour. It’s pretty cool.

So apparently it’s never too late to train “late bloomers” as if they were puppies. Or as Tank would say, “treats rule!”