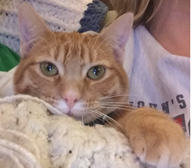 She just sat there judging me. She reminded me of a woman I had tried to talk to in Paris when I was twenty-five. The woman slowly looked me up and down, then rolled her eyes and turned away.

But this wasn’t The Parisian Woman. This was a cat. Specifically, a year-old cat named Clover. Yet she had the same effect: I felt invisible and somehow diminished.

Then Clover stretched, silently hopped off the couch and walked by me without even looking back.

So. How did a cat end up in our dog-centric house?  I blame my daughter, Brynne and her new husband, Luke.

Now, Luke is a great guy; we all loved him immediately. But there was a problem. Not a religious or political problem—worse! One night at a family dinner Brynne mentioned that Luke was a cat person and they were getting a kitten.

There was an uncomfortable silence after Brynne’s announcement. We were dog people. I could handle different political persuasions, or religions…but cats?

(The silence was like when the oldest son announces at a family dinner that he’s quitting college to become a dancer. Not that I remember that as if it were yesterday…)

I decided to break the silence by proposing that getting a cat was not a great idea. But then all the women in my family stared me down like the Eye of Sauron exerting his will over Middle-Earth. I was not to speak.

A month later they adopted a kitten from the shelter. Six months later as I had predicted, we were cat-sitting. Thus my first relationship with a feline began.

At first, Clover stayed in Brynne’s old room. I was admittedly curious. What do cats do? Mostly they lounge. I’d find Clover on the bed, in baskets or asleep on a stack of towels.

She wanted to have nothing to do with me or our dogs. By the way, our dogs started out curious, then they ignored her, and finally they became somewhat nervous. Clover would silently appear anywhere at any time, bat Tank on his nose, hiss and then disappear. I’m sure our dogs believed she practiced the dark arts of feline magic.

After a few days I noticed Clover peeking out around the bedroom door and sizing up the situation. It wasn’t that she was shy, it was more like disdain. If you’ve ever had teenage girls, you know the drill. “Fine, even though you are the most embarrassing parents on the planet, I will lower myself to eat dinner with you.”

At some point Clover realized that not only were dogs and people not a threat, but they were essentially lower life forms that she could rule. We entered the period of Cat Attack, where she pretended to be a velociraptor. I’d be sitting on the couch reading and “Bam!” there was a cat on my shoulder! We’d be asleep at 4:00 a.m. and then, “Yikes!” Clover would jump on my head and then be gone.

I was astonished at how quickly she could bite or scratch me and then vanish. It was like the old western movies. Someone would be shot, they’d look down and say, “Hah! Just nicked me.”  Then five minutes later they’re bleeding out.

Bleeding aside, I did warm up to Clover. One morning before work we actually played “bat the stuffed mouse,” “hide under the pillow,” and “attack the hand” for ten minutes. Then, in a totally manipulative way, she did the arch-the-back, purring, wanting-me-to-pet-her thing. She finished by curling up next to me and falling asleep. We were apparently bonding.

Cat Got My Tongue?

I would never admit it to my family, but after day five, I could see having a cat in our house. (If you quote me, I will deny it.)

I thought about why. It occurred to me that although dogs are amazing, a cat inhabits a house. They move in and own it. Every room, every corner and every window sill is lived in. I’d look up and there would be Clover, peering down at me from a kitchen cabinet. Her presence was felt even when she was out of sight.

​After Clover left, our house felt a little emptier. But I had learned something: Maybe, just maybe, you need a cat to make a house a home. (But I never said that.)