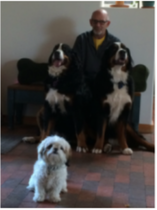 Last week we walked in the early morning gloom. Fog, so rare here and thus so amazing, blanketed the hills around our house.

Our dogs are big black and white Berners. As we move down the road they silently pad along with me in-between. They bump against me every once and a while, as if simply wanting to make contact.

This is our morning ritual. Before we go, they lie patiently on our kitchen floor waiting for me to finish my coffee. Yet as soon as I move…

Tank begins to whine. He tries hard to be patient, but there are limits. I think this walk for him is his favorite part of the morning, maybe the entire day.

As we walk down our road, Tank keeps his head down, smelling the underbrush. Occasionally he butts his head directly into the chamisa, thus the name “Tank.” Nellie’s eyes are up, always scanning.

We walk every morning around our road of piñons, arroyos, and ridges, a little over a mile a day.

On a piece of scratch paper I figured out that at one mile a day, we’ve walked 237 miles since my sister died
​
We walk early in the morning, when there are few people. Since that first mile, I’ve become a little more introverted, less interested in stopping and talking.

Instead, I watched how our dogs are in the moment. They don’t make plans, lists or worrying about money. They want to smell everything. They stop at every pile of snow — all of the piles wet and shrinking now that it’s spring. Their excitement at seeing rabbits never wavers. It doesn’t seem to matter to them if it’s cold, hot or unbearably windy and the wind full of pollen, they are excited to walk.

In the hospital, my sister Bonnie and I sat with Susie as she slept when the Hospitalist came in. The doctor was young, in her thirties. She took a blue dry erase marker and wrote on the white board in Susie’s room, Leptomeningeal Carcinomatosis. A cancer of the meninges, she said. Nothing we can really do, she said. Maybe four weeks, she said.

It is the best part of the day to be outside, right? In New Mexico, a wet morning is magical. In the fog that morning we came across a big coyote, as tall in the shoulders as Tank. He was crossing the road when he saw us. He nonchalantly paused, looked straight at me, eyes full of wildness; birth, life, suffering, the pleasure of a successful hunt, death.

Tank whined and Nellie barked a couple of times, but the coyote trotted away, indifferent, as they seem to always be. The dogs lost interest and came back to the present.

Sometimes on our walks we bring Tallulah, my daughter’s little white Japanese Chin- Shih Tzu mix. She weighs maybe ten pounds. She sprints ahead and back and across the road the entire way. I’m always a little on edge with Tula on our walks. I scan the sky for hawks and keep her close thinking about that coyote and how quickly things can turn, how fast death can come in the wild.

After maybe two hundred miles after my sister died, I admitted to a friend that I’d lost a lot of passion for what I do. All I wanted was to get up and walk with Nellie and Tank.

And she told me, then do that. Just get up and walk your dogs, don’t worry about anything else.

So that’s my plan now.

When we come back to the house, the dogs nuzzle against me until I take their leashes off.

Then they bark until they get a treat. Treats in their mouths, they sprint to the carpet in the living room and lay in the same place next to each other. The same as they’ve done since they were six weeks old. I like that consistency, the habit, the same thing every day. No surprises. No “now you’re here, now you’re not.”

As summer comes we’ll walk earlier. Maybe we’ll walk while it’s still dark and cold with the stars just fading and the sun rising over the eastern hills. It’s about then the cacophony of birds begin praising and celebrating another day.  And we’ll walk, Tank’s head down inhaling the cool morning and Nellie’s head up scanning the horizon.

That’s how I want to be: just in the moment, uninterrupted.

A Mile Every Day.