You are here: Home / Archives for Uncategorized

This is Ramos Tsosie, a 20 veteran Firefighter-Paramedic. He now works with the Mobile Integrated Care office with the Santa Fe City Fire Department. Give it a listen!
https://youtu.be/gOm71oqHGfg 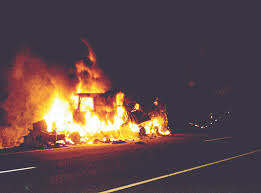 The Lieutenant pointed at two of us: “Get into the trailer and make sure there’s no fire.”
The “two of us” was one career guy in his twenties who was enthusiastic and fit. And then there was me, sixty-eight and a volunteer.

2:00 am in the morning. On the interstate. The cab of the semi was fully involved with flames shooting up twenty feet. However, the trailer looked like it had escaped any damage. But the “LT” wanted to be sure.

We were in our bunker gear and SCBA’s (our breathing apparatus), so we humped over to the back of the trailer. It took a few minutes to open the trailer door and break the seal, but then the fun began.

Ninja-like, my partner literally leaped up five feet into the dark and cavernous trailer.

“Crossfit,” I muttered to myself. In my defense, I also workout at a Crossfit gym, but I’ve long ago given up trying to leap over tall buildings or even up onto the three-foot platforms that maliciously occupy our gym.

For a moment, stuck there trying to figure out how to get up in the trailer, I thought this was the reason the forty-year-old by-laws of our department mandated retiring at age sixty. But sixty is the new fifty, and apparently, seventy is the new sixty. Also, if we enforced that rule, a third of our department would have to retire — we are, in my mind, the oldest department in the west.

In any case, I was not willing to throw in the towel. So as all “older” folks will understand, I had to solve the problem of getting up into the trailer in a non-ninja like way. I first lifted my leg with my arms to the rung of the first step, pulled my other leg to the second rung and slid on my belly on to the floor of the trailer. Then triumphantly I sprang into action. Well, actually, I rested for a second and then got up slowly. By then my partner had jumped up on the pallets of Pepsi and made it to the front of the trailer.

Pleased with “our” work, I reversed the process and slowly got out of the trailer. My partner just jumped to the ground. Mission accomplished.

Of course, in my fourth decade on the Fire Department, there are activities that I don’t participate in anymore. I don’t go into burning buildings. As another older firefighter quipped, I don’t want to be the firefighter that gets dragged out of a fire by his friends. I no longer dive into wrecked cars to do patient care, and I’m not the firefighter who is going to tramp uphill for a mile to cut down a burning tree.

But there is always work to be done, the endless chores of the fire department on a scene; operating an engine, laying lines, working water supply and cleaning up.

It’s not the heroic work that people think about when they think of fighting a fire. It’s not breaking down doors or attacking the dragon fire head on, but it’s steady and interesting work, and it’s still fun.

At sixty-eight, I’ll take it.

Now, dear reader, if you are thinking about the fundamental question: “Why?” As in; “why is a sixty-eight-year-old guy out at two in the morning fighting fires?” A fair question and one my wife, friends, and occasionally my therapist ask me.

Let me explain. A friend recently texted me (yes! I text!!!) that it takes a lot of courage to get older. I think what she means is that everything is harder. It’s hard to wake up from a dream in which you’re eighteen and then open your eyes and realize that you’re old. It’s harder to do simple tasks that you’ve been doing for a lifetime. Hands stop working. The cold bothers. It’s nigh on hysterically funny to watch me try to get into bunker gear at 2:00am. It’s not a two-minute drill anymore, it’s leaning against a wall, sitting down and pulling on pants. And of course, looming in the now more closely than ever future is frailty and the Big “D.”

For those of you like me in our “mid” sixties (the sixty-two to the sixty-eight group) — there is also a bittersweet quality to this age. We are excruciatingly aware of time passing, and our memories illuminate our consciousness more than our dreams of the future.

This is the time!

My mother, who is only seventeen years older than I, recently broke her hip, had surgery and ended up in a rehabilitation center. They are kind to her there, they are compassionate but insistent. There is a schedule, and you have to stick to it. Breakfast at 6:30 a.m. Physical therapy at 8:00 a.m. and so on and so on. If not for The Schedule there would be institutional chaos, she explained to me with more than a touch of sarcasm. Independence is gone. The ability to get up in the middle of the night and have ice cream is gone. She doesn’t want to be a burden to the family, but she is terrified of being warehoused someplace where this becomes her life.

That hip fracture, that bout of pneumonia, those first hints of dementia and the loss of independence are out there in the future. I get it. I don’t dwell on it, but it sure makes me appreciate the now, it makes me defiantly want to dance at that college reunion in front of mortified college kids.

And even though I am not the ninja-guy, it definitely keeps me on the Fire Department. The purpose of life, as Ralph Waldo Emerson wrote, is not about being happy, it is about being useful. In my own way, I want to be useful for as long as I can stretch it out, on as many late night fires as I can.

The morning after the semi fire, I woke up late and was a bit stiff. I figured my twenty-something partner had probably already gone for a run and done God knows what else.

I got up, had coffee and thought about the fire. Even with all the limits that come with being an older firefighter, it had been a pretty cool fire. I was content to be there, happy to help and maybe even a little exuberant that, at sixty-eight, I could still come out in the middle of the night and make a difference.

The past is the past, the future is unknowable. Today, don’t be afraid!

A quick summary of this video: Never give up on a goal!

Seven Days to a More Courageous Life
A free downloadable PDF that can help you brush up your courage and find calm in a stressful world.

It is no secret that we live in stressful times, economically, politically, and in our personal lives. If you’re like me, you wake up every morning wondering what will today’s crisis be, right?
Well, welcome to the world of the firefighter. Everyday we know we might have to respond to a catastrophe, a fire or a car crash.
From the beginning of their careers, firefighters learn to deal with situations that are difficult, tragic sometimes and often way outside their comfort zones.
Good firefighters learn skills and habits that not only help them manage those situations, but often thrive.
I’ve learned a lot about courage — and the ability to be calm in a crisis — from hanging out with firefighters and I thought I’d share the wisdom.
I’ve put together a seven-day, 10 minutes a day program called, “Seven Days to a More Courageous Life.” It’s free!

Instructions:
Go to top of the home page (herschwilson.com)
enter your email
follow the link
Download the PDF
Done!