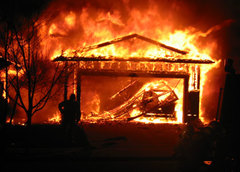 It was our fifth month on the department. It was all still new. So when the horrendous screeching of the pager went off early that morning, I nearly had a heart attack. I heard a muffled voice next to me moan, “Jeez, what the hell?”

It took me a second to remember: pager, Fire Department, get!

But a few minutes later, disoriented and still sleepy, we were dressed and driving.

A unique part of the volunteer life is the experience of driving while both half asleep and adrenalized, trying to recall procedures before arriving on a scene.

Minutes later we saw the orange glow. Opening my window, I could smell smoke and a sweetly sickening odor inside the smoke. We turned the corner and the full scene came into view. After a dozen false alarms, this was real; our first fire.

“Holy shit!” Laurie whispered, as we walked up the driveway, buckling our bunker coats.

At your first big fire, it’s a struggle to remember everything you’ve been taught. Fire attacks all your senses. You feel, smell, hear and see it.

Think of fire as a living thing; the dragon. You watch her dance as walls and roofs collapse, flames leap fifty feet in the night sky, radiating a heat so intense that it makes you turn away. She crouches in the corner of a room, dark red and glowering, enveloped in black smoke, whispering to you, “Break a window, open a door and let me suck the air out of the universe.” You feel terror when her flames turn and bend towards you in tall grass. She wants to see you run, knowing it’s no match: she will catch you.

Fire will burn until there is no more fuel. She will not stop; she will not tire. Give her fuel and she will grow. She will devour houses, forests, neighborhoods and cities. Fire can devour them all.

Fire is the destroyer. It struck me later that this is the reason we have fire departments, not just “emergency” departments. Fire is the true and mortal enemy. Deep in our ancestral DNA lies the terror of this dragon.

But this early morning, barely awake, we were not thinking anything this metaphorical. We were simply praying not to do something stupid. It was like the first high school dance; I felt strangely hot and sweaty.

We walked up to our Chief, Dan. He was standing by his old Bronco on his radio, silhouetted by flames. There was the sucking sound of air flowing into heat. Smoke was dark and now roiling out of the windows.

Firefighters were yelling, hauling hoses off the engine and setting up water tanks. Three firefighters were throwing on SCBAs. In their helmets and masks they looked like medieval knights. Every few seconds, they turned around and sized up the fire. They didn’t look scared, just excited.

“What do you need?” Laurie shouted to Dan over the roar.

The radio crackled. “Command, everyone is out of the house except the dogs. Owner says there are twenty-three dogs. Most still inside.”

“She was an animal hoarder,” Dan turned to us and said. “The house is full of dogs. But when we got here, all the doors were closed and locked. The fire was everywhere. The dogs never had a chance. Most of them are piled up by the back door, I saw them when we did our first walk-around.”

I shook my head. That was the sickly sweet smell, all those dogs . . .

Dan got back on the radio. “Cancel the search. Exterior attack only.”

He looked at the house. Flames had breached the roof and it was collapsing. The windows had blown out. There was heavy smoke pouring from every crevice.

Paul shrugged. “It’s lost. No one goes in, too dangerous. Even if there were people in there, it’s too late. We couldn’t save them.”

He looked at us. Maybe he saw a little bit of shock on our faces.

“We have enough folks up here. Go move that supply line to the side of the driveway so we can get the city Engine up here.”

Laurie and I looked at each other, knowing we’d never get over the smell. We turned and headed down. Thirty yards away, I could still feel the heat on my back.

The big yellow supply hose snaked down the driveway. We got down on our knees and shoved. It took us a few minutes of muddy struggle, but we finally pushed it to the side. As soon as we were done, another engine roared by us to join the attack. As we followed it back, one of my boots got stuck in the caliche mud. I yanked it out and limped the rest of the way back to command.

Paul told us to stand by. The early excitement of a big fire had drained out of everyone. The two engines had hose lines out and firefighters were flooding the structure with water.

Thirty minutes later, the dragon had vanished; she had moved on, but she’s never defeated. ​

Now we were faced with the hard, slogging work of salvage. Except with this fire there was nothing to salvage. All the dogs were dead and with the house gone, their remains were visible through the smoke.

Dan was sitting on the hood of his truck, his bunkers and white helmet caked with grime. The eastern sky was starting to brighten. Crews were walking through the skeleton of the house putting out hotspots. I heard a woman’s voice yell, “Damn!”  Then, “I’m fine, I just stepped on a dead dog. They’re everywhere!”

Laurie and I drained and stacked hoses and collected equipment.

At the end, Dan came up to us. Laurie was sitting on the back of the Med Unit. I was leaning on a shovel. We smelled like smoke. My bunkers were now dirty and Laurie’s face was smudged with soot.

“God,” Laurie said, “all those dogs. I never heard any barking, they must have all lost consciousness from the smoke before they died.”

“Well,” I said, “at least a couple got out. I saw them running around the scene. They must be terrified.”

Dan took off his helmet and threw it in his truck. “I called Animal Control. They’ll round up the strays and take them to the shelter. That’s about all we can do.”

“Yeah,” Dan replied. “But you can’t dwell on it. We did everything we could. You can’t think ‘What if?’ We do our best and go home.”

Laurie looked at the shell of the house.

Dan continued, “I know it sounds callous, but you can’t care too much, you have to stay detached. Otherwise you won’t last on the department. Other people have the luxury of getting upset, but if we get too emotional about it, we won’t be able to do the work.”

Paul walked up and chimed in. “I always have to remind myself that this is not my emergency. It’s hers,” He pointed to the distraught owner who was talking to the police. “But it’s not ours.”

We stood in a little group, fatigue settling in.

​​The drama is putting out the fire. After the fire is out, everyone leaves. The bystanders, the police, the media—everyone except the fire department. We usually have hours left of finding equipment, cleaning and filling engines and tankers.