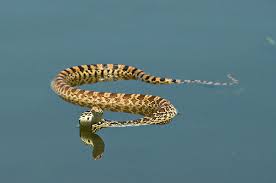 “Snake” Laurie whispered over the phone, trying to catch her breath.  “Snake in the pond!”
It was her “special” snake voice.
Knowing how Laurie felt about snakes and that we had baby koi in said pond, I did a U-turn and zoomed home.

She continued.  “There was a little garter snake in the pond and I got him out, but when I bent down to scoop him up, I looked up and there was a big bull snake three feet from my head! And it was trying to get in the pond!”

Not a crisis in the sense of should we attack North Korea, but knowing how Laurie felt about snakes, I knew I would have to screw my courage to the sticking point and prepare for snake battles.

Important Note:  NO SNAKES WERE HARMED DURING THIS STORY!

Laurie and I seem to be snake attractors. We’ve had rattlesnakes in the garage and portal and a red racer caught in the tomato netting, (cut out and saved with surgical precision by my daughter Sully as I “assisted.”). We’ve had more bull snakes then I care to count. My favorite encounter was a bull snake in the house that we couldn’t find. After seeing a tail slink into a gap in the kitchen wall, we had torn apart the wall under the sink trying to find it. Laurie finally gave up looking and as she leaned against a bannister ready to call us off, I noted that the snake was wrapped around the bannister, it’s head inches away from her. I said something to the effect of, “Laurie, don’t look now. . .” But then she saw it and sprinted down the hallway.

All harmless encounters, but this was different. A few weeks earlier I had caught a bull snake in our pond post-swallowing a baby koi. It slithered away before I could do anything. Sensing easy meals, it was back.

Unlike rattlesnakes who are ambushers, bull snakes (Pituophis catenifer sayi) are hunters. They seek out prey; diving into burrows and apparently into ponds and streams. Bull snakes are constrictors. A note: If I was a rabbit, I don’t know which would be worse, the venom of a rattler or being crushed to death by a bull snake: A rabbit existential question.

It doesn’t help that bull snakes get big, easily up to five feet long with some specimens recorded nearly eight feet long. (God help us all!)

Normally bull snakes are relatively passive. They are slow moving and easy to distinguish from rattlers. They don’t have the flat triangular head and they don’t have a rattle. They tend to be shinier then rattlesnakes who are dusky. Of course, it takes more than a nano-second to observe the differences and most people would just rather get the hell out of dodge upon seeing any snake. The cool-amazing thing about bull snakes is that they imitate rattlers, they coil and vibrate their tail, especially in grass — making a sound similar to rattling.

By the time I got home, Laurie had scared the snake away. We reconnoitered, noting that all the new baby Koi were safe. We decided to cover the little pond with burlap to keep the snakes out. And while we were doing that. . . Laurie reached to grab a rock to weigh down the burlap and immediately yelped.  There, a foot away was our bull snake, coiled inside a Spanish bayonet waiting for us to leave so he could resume his (or her) fish dinner.

As all you husbands and partners out there know, I had only one choice in this situation. It didn’t matter that I wasn’t particular keen about snakes, it was my job now to physically remove it. I snuck up behind it and gently grabbed it and slid my hand to its head. (I should mention here how much I love gloves!) It was docile, so I was able to pick it up and walk it through our house and out the door.

I should note here that our dogs, Nellie and Tank, were completely oblivious the entire time. As I slowly walked down the hall, the snake’s head brushed against Nellie and she didn’t even notice. So much for being the highly alert guard-type dog. 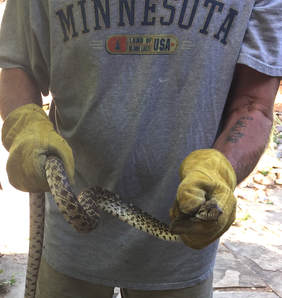 ​As I carried the snake down our road to an arroyo, I kept chanting “bull snakes are our friends!” And they are. They are a crucial part of the eco-system here in Santa Fe. I just wish they would stay away from seafood.