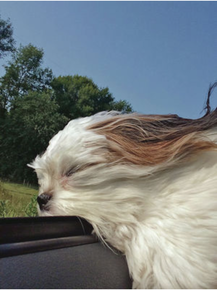 My soon-to-be-married daughter Brynne, her dog Tallulah, and I were driving through Trinidad, CO, on the way to Minnesota and Brynne’s wedding.

We had a decision to make.

“I think we should just stay on I-25 and play it safe,” I said, consulting Google Maps. My intuition insisted that, when transporting wedding dresses, wedding supplies and the bride, it is best to err on the side of caution.

Tallulah, excited by Brynne’s voice, yipped once and licked Brynne’s face: the deciding vote. So we veered off on a two-lane road into Eastern Colorado, headed vaguely Northeast on our way to Foley, Minnesota, and the wedding.

But this wasn’t the first time I made a trip between the Rockies and Minnesota with a dog aboard.​

Once on a Friday, my college friend Bill Adams and I mutually decided, “Hey let’s drive to Minnesota! We can do laundry and then drive back Sunday!”

Sounded reasonable. So we loaded Bill’s 120-pound St. Bernard “Flecken” in the back of my Toyota Corolla and headed east. We planned to drive straight through, eighteen hours, but Flecken kept putting his massive head between the seats and essentially whine, “Guys, I need to pee!” He’d then shake his head sending drool everywhere.

Multiple stops followed. Each stop punctuated by us chasing Flecken around rest stops on I-80 in the dark. Arriving in Minneapolis, all the windows were covered in drool and fur. When we opened the door, Flecken plowed over the front seat with his leash on and sprinted out and jumped up on a terrified guy with crutches and a broken leg. Woof!

Spontaneity is great, but you can’t just throw a big dog in the backseat of a small car and then drive for twenty hours. Lesson #1: Have a plan.

While Flecken jumped all over the guy with crutches, we surveyed the damage done to the backseats. Lesson #2: Bring plenty of paper towels and cleaning supplies.

In observing Flecken’s poor victim, we realized the dog could’ve used a little more fresh air along the way. Lesson #3: The more exercise a dog gets en route, the less likely they are to knock over a guy on crutches at destination’s end.

German Shepherds, as you might expect, were much more disciplined. Driving home from Colorado to Minnesota in the same aforementioned Toyota, my loyal shepherd, Alyosha, sat in the front seat staring out at the winter road and occasionally licked my face. (Yes. He was named after Alyosha Karamazov from The Brother’s Karamazov. At that time, I was minoring in Russian literature and I was very sincere in my pretentiousness.) We might have been playing the theme from Doctor Zhivago on the eight-track cassette. Lesson #4: It’s great to have an awesome dog on a road trip.

Twenty years later, driving two German Shepherds was less awesome. Zuni and Sombra barked at every truck that passed us. They would run side to side in the back of the Ford Explorer chasing passing cars as if they intentionally wanted to see what would happen if the SUV rolled. We stopped for the night in a hotel in North Platte, Nebraska. Slogan: “Where the West begins!”

There was no rest in the west however, because every creak, every person walking by our room elicited mad-carnage barking and eventually a call from the front desk. Suffice it to say, we left at 3:00 a.m. Lesson #5: Some dogs just don’t belong in hotels. Do yourself a favor and plan on camping.

But these were all stories of big dog road trips. Tallulah, Brynne’s dog, was a pint-sized ten-pound Shih Tsu mix: small in stature but big in love.

The car was packed to the gunnels with wedding paraphernalia, but we had carved out a small bed for Tallulah in the back. She, however, spent most of the trip perched on our laps looking straight ahead or hanging her head out the window. She was happy-go-lucky and happy to be with us.

I definitely got the sense that she was thinking, just go for it!

So we abandoned my forty years of experience of driving the same way on the same road and took off from Trinidad towards the Pawnee National Grasslands. There was no traffic. Most of the roads had no signs and it was empty and beautiful. There were fields of sunflowers. Tallulah had her head out the window, inhaling this new country. And, we made it to Minnesota just fine, behind the summer rains. Lesson #6: When a small dog votes for adventure, go for it!